Alexandra Topping in the Guardian writes on Tue 24 Apr 2018 "First statue of a woman in Parliament Square unveiled" about the lack of female statues in Parliament Square in London, that was changed just recently "...when a 8ft 4in bronze statue of the suffragist campaigner Millicent Fawcett was unveiled in the shadow of the Houses of Parliament"

"Speaking at a formal unveiling of the statue, she (Criado-Perez) said: “Women are still woefully underrepresented in all areas of British cultural and political life , not least in its statues.” Pointing out that less than 3% of statues in Britain depict real, non-royal women, she added: “With this statue of Millicent Fawcett, the first statue of a woman, and the first statue by a woman, in this iconic location, we’re making one hell of a start on changing that.”" 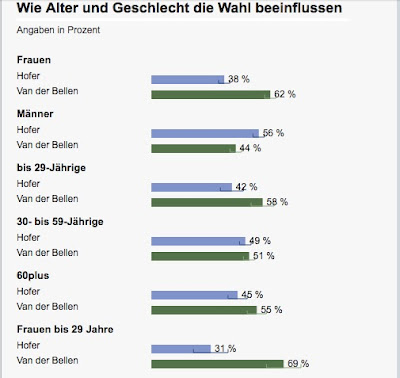 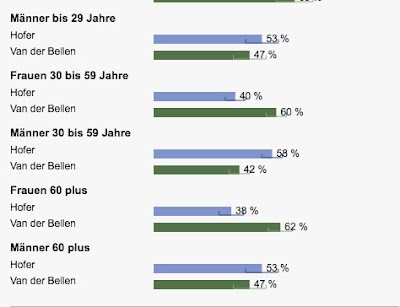 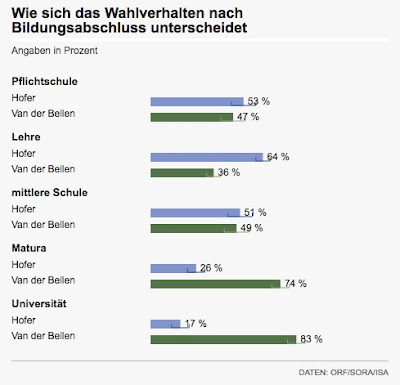 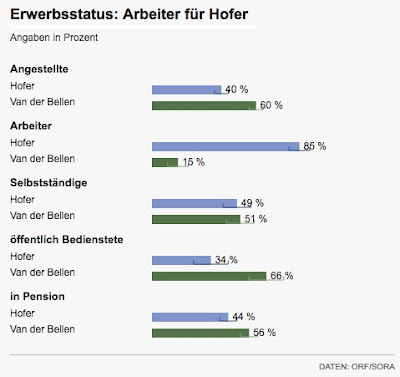 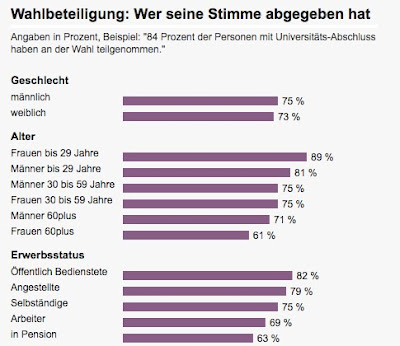 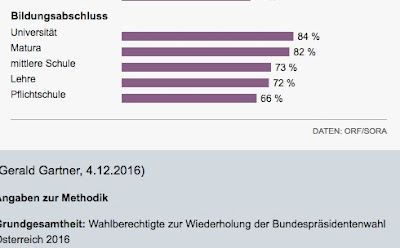 I wrote happily how women in Austria changed the election here. Turns out, we need to vote gain, as not all went as it should have (though there was no evidence of fraud, just of improper timing of opening ballots).

As it seems, the US seems to be in a more extreme version of a political gender divide: 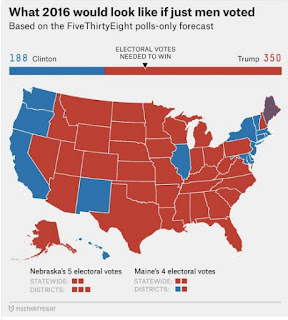 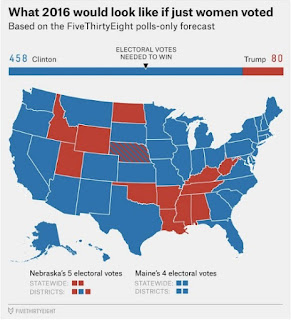 This is more than a week old though, I'll be curious how this looks later today....
Posted by Unknown at 2:30 AM 3 comments:

A new article in JEP "Diversity in the Economics Profession: A New Attack on an Old Problem", by Amanda Bayer and Cecilia Elena Rouse.

The article starts with " In the United States, of 500 doctorate degrees awarded in economics to US citizens and permanent residents in 2014, only 42 were awarded to African Americans, Hispanics, and Native Americans and 157 to women (although this double-counts the 11 minority women who earned economics doctorates in 2014). "

There are about 1100 students who receive their PhD in the US (see NSF report) of which about 33.4 are female, about the same percentage as for US citizens and residents.

It seems that Econ is doing much worse than many other fields (see Figure 1 from their paper below, where Economics (E), Humanities (H), Social Science (SS) Business (B) STEM (STEM) 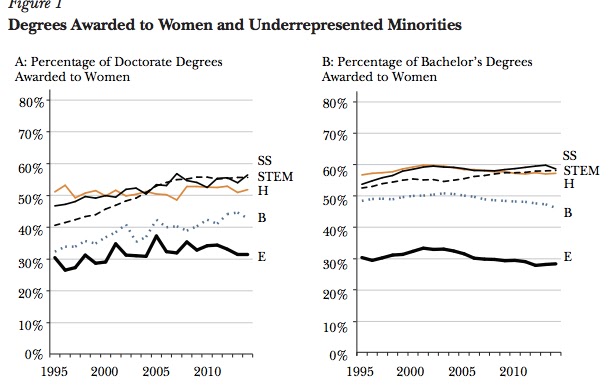 Thinking about why women are not becoming economists, they write:
Performance in early economics courses—such as introductory courses—and especially relative to performance in other courses may also be related to the decision to persist in economics. Rask and Tiefenthaler (2008), using 16 years of data from a liberal arts college where economics is a prominent major, find that women are more responsive to their relative grades in economics than are men. Of course, if this response exists across economics departments, it is likely related to the specific context of economics, including advising practices: if women were universally more responsive to relative grades, then they would also be more averse to majoring in math and science, where grades tend to be low (for example, see Butcher, McEwan, and Weerapana 2014, in this journal), but where female representation is higher than in economics."

Being economists, they also have a section on why it may matter why there are no women and minorities.

The new (vol 2 of the) Handbook of Experimental Economics, Eds John Kagel and Alvin Roth, came out!

The article begins with
"Last week, the replication crisis in psychology was pushed back into the news when Susan Fiske, a former president of the Association for Psychological Science, wrote a column in which she criticized “online vigilantes” on blogs, Twitter, and Facebook who have taken prominent work in social psychology to task. Fiske likened these “destructo-critics” to “methodological terrorists.” "

He then asks:
Why does psychology continue to dominate the news when it comes to discussion of the replication crisis?

Why not economics, which is more controversial and gets more space in the news media? Or medicine, which has higher stakes and a regular flow of well-publicized scandals?

He has 5 explanations (abbreviated here)
1. Sophistication: "..psychology is an inherently difficult field, studying constructs such as personality, intelligence, and motivation, which are undeniably important but which by their nature are “latent constructs” that cannot be measured directly."

2. Overconfidence deriving from research designs: When we talk about the replication crisis in psychology, we’re mostly talking about lab experiments and surveys. Either way, you get clean identification of comparisons, hence there’s an assumption that simple textbook methods can’t go wrong.

3. Openness. ..In psychology, it’s relatively easy to get your hands on the data or at least to find mistakes in published work.

5. Everyone loves psychology: It’s often of general interest (hence all the press coverage, TED Talks, and so on) and accessible, both in its subject matter and its methods.

What do you get when you put it together?
The strengths and weaknesses of the field of research psychology seemed to have combined to (a) encourage the publication and dissemination of lots of low-quality, unreplicable research, while (b) creating the conditions for this problem to be recognized, exposed, and discussed openly."

I actually always thought that there might be another reason (though admittedly I have not fully tested that theory with psychologists). But it seems in psychology, there is a huge bonus for having your own bias or model, and people mostly don't work on other people's experiments. In economics, on the other hand, it is perfectly fine to work on extensions of others' experiments and still have a great career. Luckily for me, for example, my paper with Lise Vesterlund was replicated many times, where most of these replications, and certainly almost all that are published, are in papers that have extensions where the baseline experiment was a big part of my experiment with Lise Vesterlund.

I feel that replications are common in experimental economics, and perhaps more so than in psychology, and so this may reduce the eagerness to publish results that feel not robust, and definitely may reduce the long successful careers some psychologists enjoyed before it was found out that their papers were fraudulent.

One way to think of this, is that there might be a real need to find out how many papers in economics are "replicated" where replications should be thought of in a very broad term. Then it could be interesting to compare this to psychology papers. And an important twist might be that a replication by the same author should perhaps not get the same weight as a replication by others.