Uri Simonsohn has several papers on scientific conduct, that should be a rule not only in psychology.


Their abstract reads:
"In this article, we accomplish two things. First, we show that despite empirical psychologists’ nominal endorsement of a low rate of false-positive findings (less or equal to .05), flexibility in data collection, analysis, and reporting dramatically increases actual false-positive rates. In many cases, a researcher is more likely to falsely find evidence that an effect exists than to correctly find evidence that it does not. We present computer simulations and a pair of actual experiments that demonstrate how unacceptably easy it is to accumulate (and report) statistically significant evidence for a false hypothesis. Second, we suggest a simple, low-cost, and straightforwardly effective disclosure-based solution to this problem. The solution involves six concrete requirements for authors and four guidelines for reviewers, all of which impose a minimal burden on the publication process."

A striking Figure from the paper is the following: 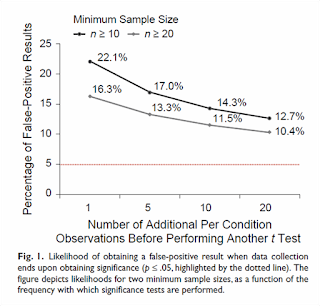