Wallflowers or being average

Daniel Jones and Sera Linardi have a paper on "Wallflowers Doing Good: Field and Lab Evidence of Heterogeneity in Reputation Concerns"

"An extensive literature on reputation signaling has focused on the desire for positive reputation. In our paper we provide field and lab evidence that some individuals are averse to any form of reputation; this aversion correlates with gender in a prosocial setting. We formalize our hypotheses of these “wallflower” types in a theoretical model. The model predicts that wallflowers will deflect unwanted attention by choosing actions that signal that they are an “average altruism type” relative to their audience. Our laboratory experiment supports these predictions."

The idea is that women, in prosocial settings, are more driven to appear average. Here is a figure that summarizes some of the work: 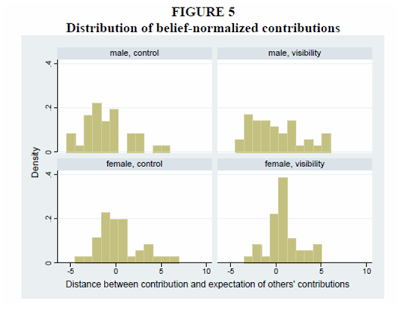