Bob Slonim tells me of a new paper of his: Matthew Lilley and Robert Slonim "Gender Differences in Altruism: Responses to a Natural Disaster," IZA DP No. 9657 January 2016

The abstract reads:
"High-profile disasters can cause large spikes in philanthropy and volunteerism. By providing temporary positive shocks to the altruism of donors, these natural experiments help identify heterogeneity in the distributions of the latent altruism which motivates donors. This study examines gender heterogeneity of volunteer response by blood donors following the most devastating Bushfires in Australia’s history. Using difference in differences analyses, we observe a sharp increase in blood donations after the 2009 Victorian Bushfires. Several key features of this increase are consistent with the predictions of a model where the distribution of latent altruism has smaller variance among women than men. First, the highest increase in donations occurs among previous non-donors, lapsed donors and less frequent donors. Further, the increase in donations following the Bushfires, compared to non-disaster periods, is substantially greater for females than males; the proportional increase in the number of females donating for the first time after the disaster is approximately twice the proportional increase for men. Notably, this gender gap decreases with the frequency with which people have previously donated. "

Here are some key figures: 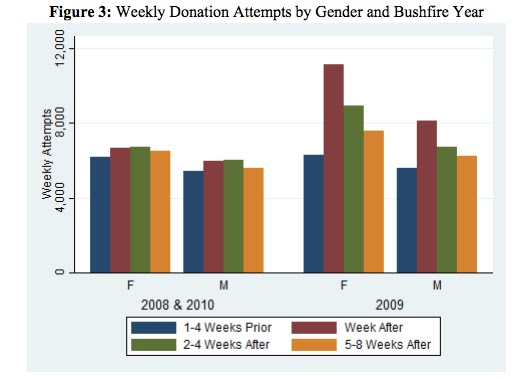 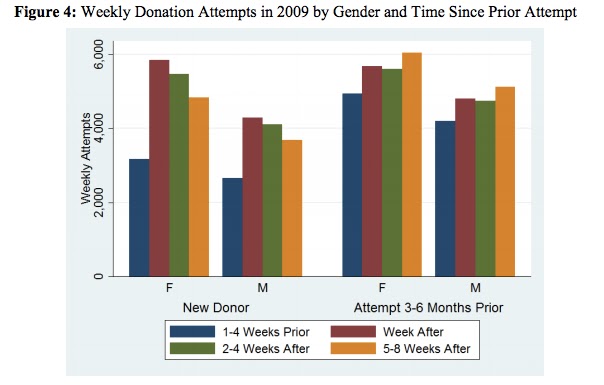