Experimental Economics is coming of age... It is now the third time that experimental economics was mentioned in the main write-up of the Nobel Prize as work done by the Nobel recipient, integral to work for which the Nobel prize was awarded.

The first time was in 2002 when Daniel Kahneman and Vernon Smith received it for "Foundations of Behavioral and Experimental Economics", where, obviously, experimental and behavioral economics played a major role.

The second time was in 2009 when Elinor Ostrom and Oliver E. Williamson shared the prize for "Economic Governance".

Third time is the charm: This year, 2012, Experimental Economics was prominently featured in the write up of the Nobel prize for Alvin Roth (very proud of my adviser:) and Lloyd Shapley.

What is remarkable is that Al didn't win the prize for his work in Experimental Economics but for his work on Market Design. Experiments are just an integral part of that work, an additional method to learn about those markets, next to theory, empirical work and simulations... The success of experiments is that they're now "infiltrating" "standard" economics.

Here's the part where experiments are mentioned (they also mentions under the headline "other contributions of Al Roth" some of his experiments on bargaining and learning).

The empirical evidence seems to support the hypothesis that stable matching algorithms can prevent market failure (Roth and Xing, 1994, Roth, 2002, Niederle, Roth, and Sönmez, 2008). However, many conditions in‡uence the success or failure of market institutions. The objective of market designers is to isolate the role of the mechanism itself, and compare the performance of different mechanisms under the same conditions. But this is difficult to accomplish in the real world. For example, British regional medical markets might differ in numerous ways that cannot be controlled by an economist. Accordingly, market designers have turned to controlled laboratory experiments to evaluate and compare the performance of mechanisms.
Kagel and Roth (2000) compared the stable (deferred-acceptance) algorithm used in Edinburgh and Cardiff with the unstable “priority-matching” algorithm used in Newcastle. In their experiment, a centralized matching mechanism was made available to the subjects, but they could choose to match in a decentralized way, without using the mechanism. When the mechanism used priority matching, the experimental market tended to unravel, and many matches were made outside the mechanism. The deferred-acceptance mechanism did not suffer from the same kind of unraveling. This provided experimental evidence in favor of Roth’s hypothesis that the matching algorithm itself and, in particular, its stability, contribute importantly to the functioning of the market.
Two regions, Cambridge and London Hospital, presented an anomaly for Roth’s hypothesis. In these regions, the matching algorithms solved a linear programming problem which did not produce stable outcomes. Yet, these markets did not appear to unravel, and the unstable mechanisms remained
in use (see Table 1). In experiments, the linear programming mechanisms seem to perform no better than priority matching, which suggests that conditions specific to Cambridge and London Hospital, rather than the intrinsic properties of their matching algorithms, may have prevented unraveling there (Ünver, 2005). Roth (1991a) argued that these markets are in fact so small that social pressures may prevent unraveling. 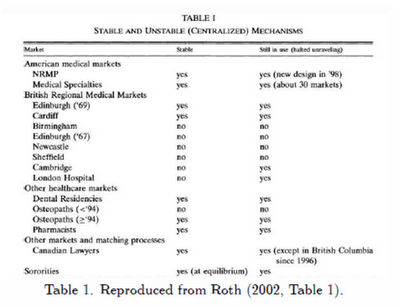 In one U.S. medical labor market (for gastroenterology), a stable algorithm was abandoned after a shock to the demand and supply of positions. McKinney, Niederle and Roth’'s (2005) laboratory experiments suggested that this market failed mainly because, while employers knew about the exogenous shock, the applicants did not. Shocks that both sides of the market knew about did not seem to cause the same problems. This suggested that the algorithm would fail only under very special conditions. Roth and M. Niederle helped the American Gastroenterology Association reintroduce a deferred-acceptance matching algorithm in 2006. Niederle, Proctor and Roth (2008) describe early evidence in favor of the reintroduced matching mechanism." For the full write up see "Stable Allocations and the practice of Market Design"


Experimental Economics received "honorable mentions" as the work done by a Nobel recipient in the 2005 Nobel prize of Robert J. Aumann and Thomas C. Schelling "Contributions to Game Theory: Analyses of Conflict and Cooperation" and in the 1994 prize of John C. Harsanyi, John F. Nash Jr. and Reinhard Selten "for their pioneering analysis of equilibria in the theory of non-cooperative games".

Experimental Economics (as in laboratory experiments) received some mention as evidence of other economists in the 2001 prize of George A. Akerlof, A. Michael Spence and Joseph E. Stiglitz "Markets with Asymmetric Information".