There is a new paper in the AER this month on "Poverty and Economic Decision-Making: Evidence from Changes in Financial Resources at Payday,"by Leandro S. Carvalho, Stephan Meier, and Stephanie W. Wang, American Economic Review 2016, 106(2): 260–284

"We study the effect of financial resources on decision-making. Low income US households are randomly assigned to receive an online survey before or after payday. The survey collects measures of cognitive function and administers risk and intertemporal choice tasks. The study design generates variation in cash, checking and savings balances, and expenditures. Before-payday participants behave as if they are more present-biased when making intertemporal choices about monetary rewards but not when making intertemporal choices about nonmonetary real-effort tasks. Nor do we find before after differences in risk-taking, the quality of decision-making, the performance in cognitive function tasks, or in heuristic judgments."

We find that the two groups made similar intertemporal choices about a costly real-effort task: choosing between answering a shorter survey earlier and a longer survey later. In line with Augenblick, Niederle, and Sprenger (2015), both groups’ behavior was consistent with present bias: the implied monthly discount rate was  9  percentage points higher when the shorter-sooner survey had to be completed within 5 days (as opposed to 90 days). 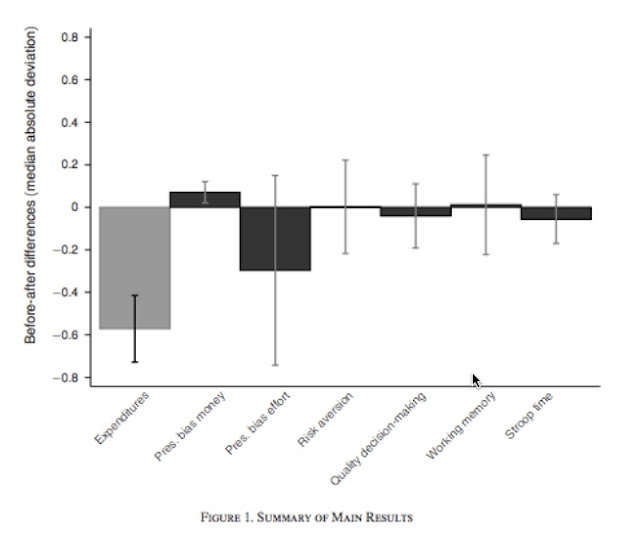 Notes: The bars show before-after differences for the following outcomes: expenditures (Study 2), present bias in intertemporal choices about money (Study 1), present bias in intertemporal choices about real effort (Study 1), risk aversion (Study 2), quality of decision-making measured in terms of violations of GARP and monotonicity with respect to FOSD (Study 2), memory span in working memory task (Study 1), and log of response time in numerical Stroop task (Study 2). The outcomes are scaled to comparable units by subtracting the median for the after-payday group and dividing by the median absolute deviation for the after-payday group. The height of the bar corresponds to the coefficient on the before-payday indicator variable in a regression of the outcome on the before-payday indicator variable and a constant. All regressions are OLS regressions with the exception of expenditures (median regression) and present bias effort (interval regression). In Stroop time, trial-specific dummies are included. The bands show 95 percent confidence intervals. Subjects = 2,496 (expenditures); 1,060 (present bias money); 1,025 (present bias effort); 1,119 (risk aversion); 1,119 (quality of decision-making); 1,038 (working memory); and 2,723 (Stroop time).


Summary of Main Results.—Figure 1 summarizes the main results (all outcomes are scaled to comparable units; see footnote of Figure 1 for more details). It shows that the before-payday group spent significantly less than the after-payday group. The before-payday group also behaved as if they were more present-biased when making intertemporal choices about monetary rewards, but not when they were making intertemporal choices about real effort. There are also no differences in the willingness to take risks, quality of decision-making, or in cognitive functioning.
Posted by Unknown at 11:20 AM