Social Insurance and the Marriage Market

I just saw Petra Persson present her JM paper "Social Insurance and the Marriage Market" at Stanford.
Her long abstract reads: "When social insurance eligibility depends on marital status, this is a government intervention into the marriage market. I formally show that such intervention influences three behavioral margins in the marriage market, and test the theory exploiting a Swedish reform of survivors insurance – an annuity paid to widows, but not divorcees, upon the husband’s death. First, I analyze bunching in the distribution of marriages and show that, by affecting the wedge between marriage and cohabitation, survivors insurance alters the composition of married couples up to 45 years before the annuity’s expected payout. This distortion is larger in couples with higher ex post male mortality, holding constant the policy’s value at realization and all demographics that I observe, suggesting “adverse selection” into government-provided insurance. Second, I use a regression discontinuity design to show that removal of survivors insurance from existing marriage contracts caused divorces and, in surviving unions, a renegotiation of marital surplus. Third, because survivors insurance subsidized couples with highly unequal earnings (capacities), its elimination raised the long-run assortativeness of matching. I argue that such marriage market responses to social insurance design have important implications for when it is optimal to separate social insurance from marriage in modern societies."

Apart from the obvious picture that shows the big spike in marriages just before the introduction of the policy change (a spike so large it is obvious it contains "additional" marriages that otherwise wouldn't have happened), I actually liked the effect of the policy on the kinds of people that marry. 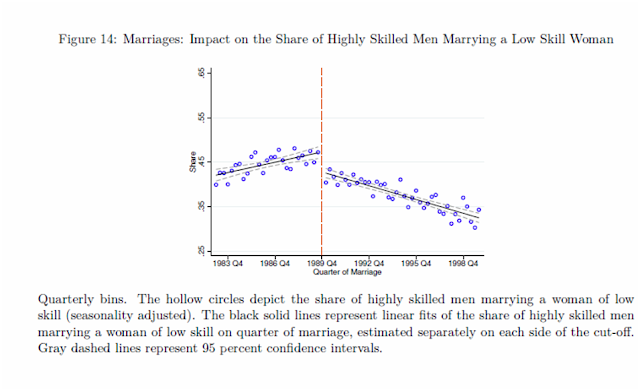 She is one of a few people on the JM with "marriage" papers, see my former post on Gender, Education and Marriage